Next week, Craig Wright is set to receive the keys for more than 1 million bitcoins, the crypto community is becoming impatient to see whether the self-proclaimed Satoshi Nakamoto will deliver on its promise. Worth more than $8 billion at press time, the unlocked Bitcoins could tank the entire crypto market.

Craig Wright, the chief scientist at nChain and chief defender at BSV, has been at the forefront of crypto news from 2018. However, the self-proclaimed Satoshi Nakamoto could see his reign over crypto industry drama come to an end at the beginning of next year.

Wright has been embroiled in a dramatic legal battle with the estate of his former partner Dave Kleiman, with whom he allegedly mined more than 1 million bitcoins in the cryptocurrency’s early days. Kleiman’s estate has successfully sued Wright and won the rights to half of the fortune they mined, worth more than $8 billion today.

However, Wright claimed he was unable to access the funds, as they were held in the Tulip Trust, a Seychelles-based fund. But, despite having lost the keys to the funds, Wright claims Kleiman hired a bonded courier to return the keys to Wright on Jan. 1, 2020.

With just a week left before the end of the year, the crypto community is becoming impatient to see how Wright’s story about the courier plays out. If the keys to the trust were to be delivered, Wright would become the owner of 1.1 million BTC, worth over $8 billion at press time.

Wright paved the way to shift the blame to Kleiman

And while the BSV community is already gearing up for a crypto revolution, the skeptic majority has been pointing out the gaping holes in Wright’s story.

The only evidence backing Wright’s claim that he is set to receive the keys is a 2011 email from Dave Kleiman. The email, produced during the Wright v Kleiman case, claims Kleiman became the sole trustee for 1.1 million bitcoins he received from Wright. The funds, worth $100,000 at the time, were to be put in a trust managed by “at least three people but not more than seven at any time,” it said in the email. 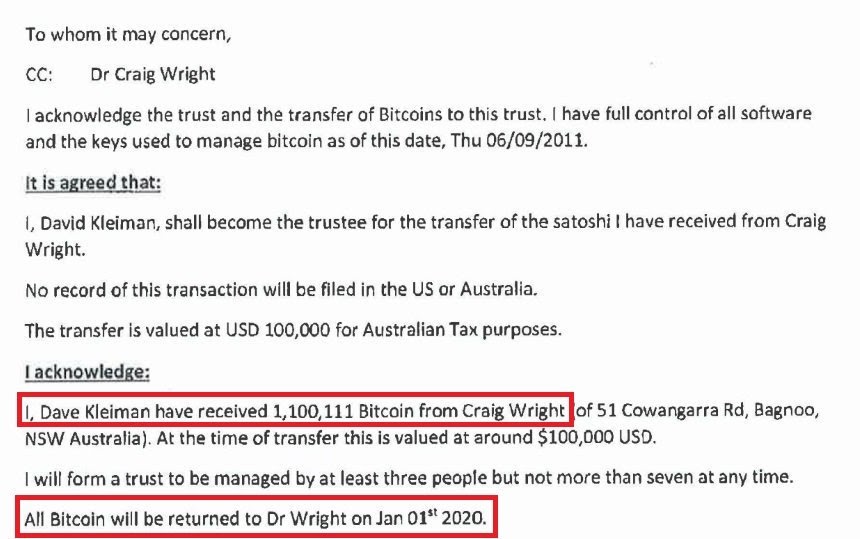 However, the originality of the email has been widely disputed. One of the main things that raised suspicion was the use of the word “satoshi” in the text. The term first popped up in 2013 during a community discussion on how to name the smallest amount of Bitcoin.

It also seems like Wright has been paving the way to shift the blame away from him when, not if, the bonded courier doesn’t show up with the keys. In court testimony, Wright said he instructed Kleiman on how to hire a courier, but he never confirmed whether or not one was actually hired.

While the story about the courier came out long before Wright claimed he was Satoshi Nakamoto, the judge that presided over his case with Kleiman seemed to think it was also a big bag of nothing.

“During his testimony, Dr. Wright’s demeanor did not impress me as someone who was telling the truth.”

The chances for this to come true are slim to none, but Jan. 1, 2020 will nonetheless become an incredibly important day for the crypto industry. BSV could possibly take a hit, while the rest of the market might firm up a bit and regain its confidence knowing that 1 million Bitcoins won’t be hitting exchanges any time soon.

Bitcoin Price to Skyrocket to $250,000 After May 2020 Says BTC Venture Capitalist

Only 1.3 million Bitcoin are left in circulation on cryptocurrency exchanges!